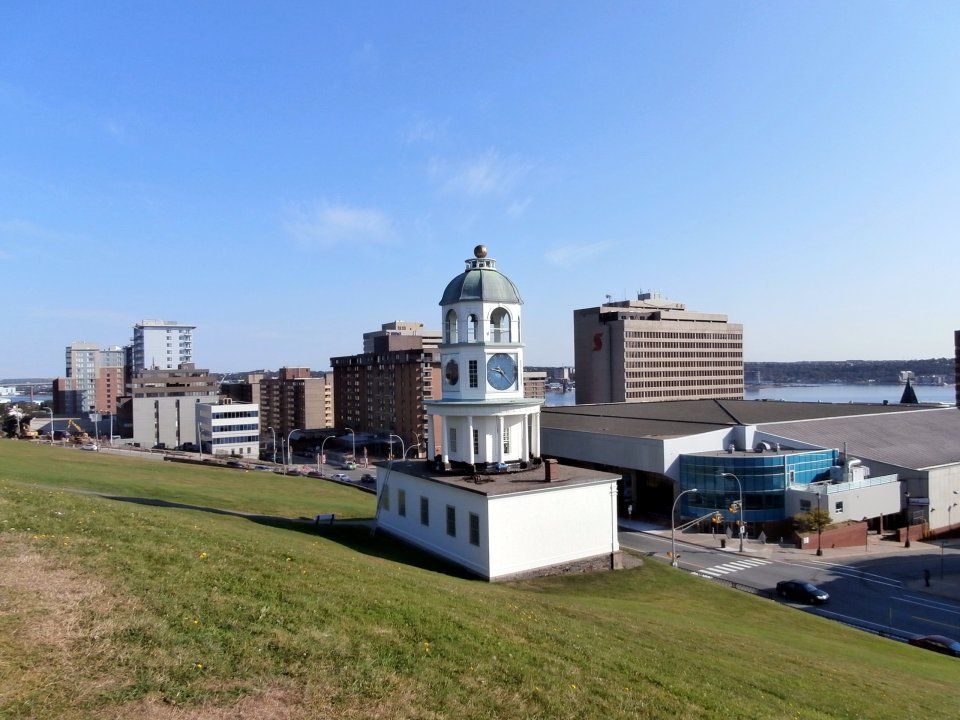 Finally, I can catch up again with my writing here and to wrote something about more recent trips. To fill you in the gap from the last post, I spent this summer unfortunately at work and then studying for an exam. It’s a pity since this sumer was amazing, but at least I was cycling most of the time everywhere and also I moved to nice house close to a lake. My work permit was also extended, so I can stay another year. To get the paper permit to my passport was a bit longer story as well but let start this post.

During my visit home I managed to make arrangements for my parents and cousin to visit here to Canada and we set the date for end of the September. I took two weeks off, so I could spend all the time with them and show them a piece of America. Since we don’t need visa any more for visiting I just wrote a letter of invitation for them to show it on the border because none of them can speak neither of official languages in Canada, but they managed to go through and I picked them up on the airport. As I said I rented a house near lake so I took them home and they stayed with me there. After a short break we just went for sort walk so they could stretch their legs after this long flight here.

Due to the fact, that my parents never traveled so much in a car we did a few short trips around to see if they would like to try something more and to see more. So I took them to a lovely Lunenburg and Crystal Crescent Beach where we took a bath for first time in North Atlantic ocean. And during those days I introduced my plan to drive up to Niagara Falls and then return through United States.

We set off early morning for Quebec, we planned to spent a first night there and this was the longest distance, we needed to do on this trip. And since we get there during a sunset we took a walk around the old city where everything was nicely illuminated by lights and disappearing sun. Here we found a room in motel near the old city for really good price, then in the morning we went to the city and walked around more during a daylight and after lunch we hit to road to Montreal. 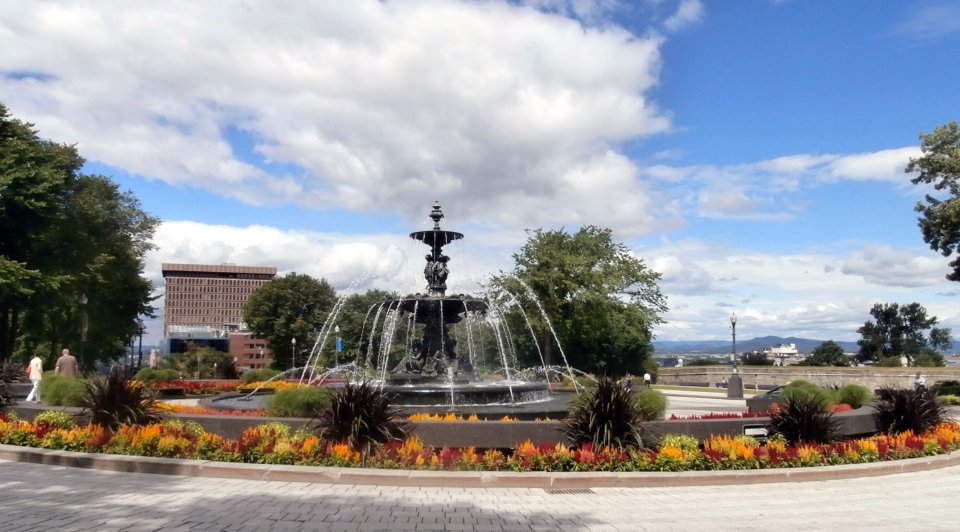 There we arrived a bit late and I could not find any normal parking on the streets and so I found some parking lot which proved to be one of the most expensive around :). Montreal at night was amazing as I remembered from my first winter visit, just this time the temperature was way better. Here we found a room in guest house which looked to be more for students and families from China, many notes were only their language and it’s hard to say what they had written on them. Also my mattress was closer to solid wood board rather then mattress so the quality was a bit lower, any way for a night it was okay for the price. In the morning we went to Mont Royal and from there we had a great view of whole city and enjoyed a great there. From here then we set off to Toronto where we arrived at night. 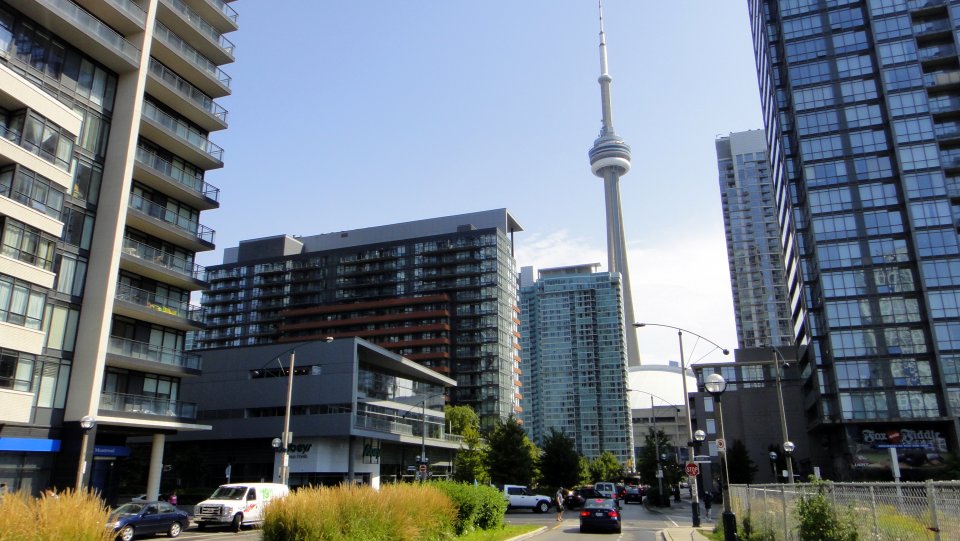 This night we spent in Days Inn at Markham and this was a different sort of accommodation  so we went this time also for swim to motel pool. We did not saw the city at night as it was far from our motel. So we went to the Toronto downtown next day morning and this time the way there was also longer then usual thanks to traffic. We arrived there just on Saturday when there was a game of local baseball team Blue Jays and then some Fan con and also some another event and so everywhere was lot of people and cars. This also prolonged our out of city. What I can say for sure Toronto is not a city for me, it’s just too big and transportation is also a problem. For us it meant that to get from there to Niagara Falls, which is about 130 kilometers took a lot of time due to traffic jams for most of the way we hardly reached sixty. This just happened due to longer weekend when many people from Toronto were heading to the same directions. Also we managed to get there at the end.

Since we arrived this time still with some daylight left, we went first for some walk around the city of Niagara Falls as well as the falls themselves. The part around those falls is like a big theme park with many casinos and attractions, something like Las Vegas of the North. The waterfalls are huge, still they were not so amazing for me during a day probably also due to the surroundings and I can tell you they would not be high on my personal list of places to see in Canada. Also accommodation there was the most expensive we had on whole trip while it was not equal to quality of it but as I said before it was a long weekend and it was not easy to get anything better. Later we went to see waterfalls at night when they illuminated them with light and there was a great firework and water show at the same night. For me the night experience was a way better then previous one. Then in the morning we went around river Niagara to Fort Erie were we wanted to cross the border to United States. 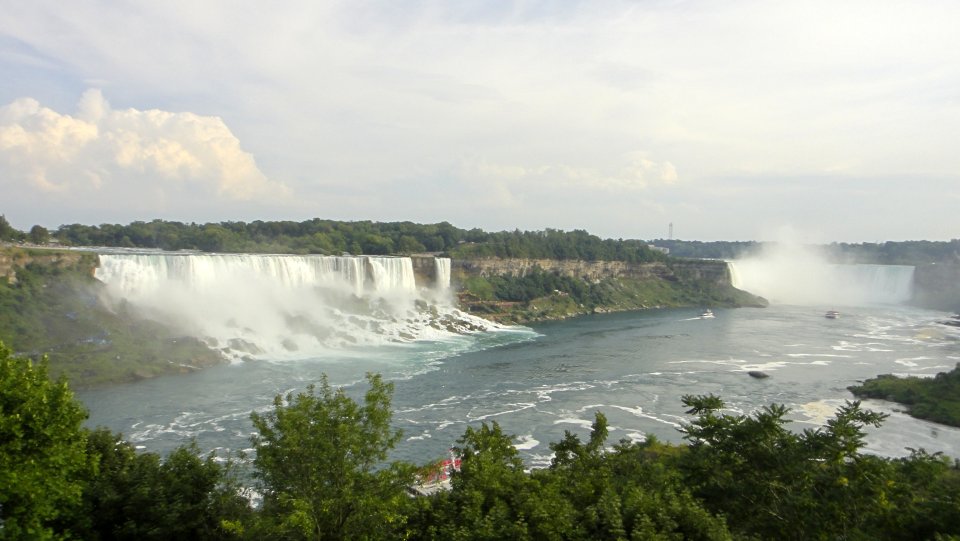 And after an hour of waiting on the border we get to Buffalo, there we just walked a bit around and also had a lunch in nice restaurant and then we headed towards east coast but we decided to spent a night at Oriskany, which are close to Adrionack Park, so we won’t spent all the time in cities. Also we saw in nearby  Walmart, that here is everything cheaper in compare to the north neighbor. Probably no need to mention that also gas is cheaper when a lot of oil comes from Alberta and other places in Canada.

Then in morning we went to the park where we could see that the nature of the state of New York is also great and amazing in Adrionack Park which is the biggest protected area in United States and also saw several fights with British and Canadian forces. The past times here close to the border were not always so peaceful as you would think from present look. Also this was a place where we needed to decide if we want to go to New York City or we will skip it this time and after our experience from Toronto we decided to take a highway straight to Boston and it’s also more on our direct return road. So this night we spent close to the Boston.

We went to downtown in the morning and I managed to find again expensive parking, I will need to learn to drive a bit around to see what place can offer and not rely on feeling that all the prices around would be the same or more expensive. We walked the Freedom Trail which takes you around the city through the places where American freedom fight took places and you can learn a lot about it due to many informational panels and you could see the city itself and his historical interesting parts. For me I had to say that I liked Boston more then Toronto, probably because of the history. 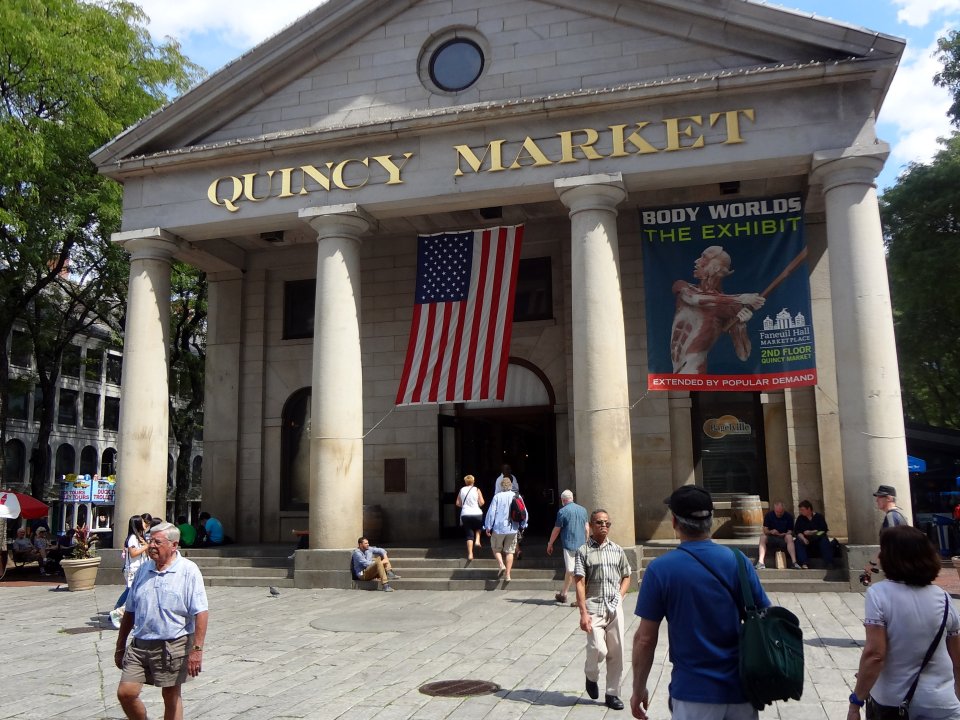 And from Boston we were heading north towards border with Canada and this night we spent at Bangor and next day we arrived to Saint Stephen. Here after getting through the control and when I pulled over to get my work permit from Immigration and Border control office my car refused to start and continue in our trip. Later when I get it towed to garage where they found that starter burned off and they will need to replace it and also told me the soonest they can have it is tomorrow so we had one extra unplanned stop. But I can say we were so lucky it happened here in the city where we found such a great people to willing to help us not somewhere in middle of nowhere in united states where it would be way harder to get some help. And next day when this was fixed by new starter which arrived in morning by express courier service we set off to continue on our trip. Our next stop was at Saint John where we walked around a bit and had a lunch where we decided to continue straight to Halifax.

The weather was amazing all the time and also on our return it was still great so we walked around Halifax a bit and in the afternoon we went to Rainbow Haven Beach. Unfortunately the following day was weather a bit worse and we did not tried it to reach to Cape Split where I wanted to take them for a last day so we just went to Lower Sackvile and then were for some shopping.

After all, we made over 4,000 kilometers, four Canadian provinces and also four American states. My car also crossed the 200,000 kilometers so we have rounded all nicely.