Last two weeks in Vancouver and my new sphere

So here is a new post as I have several new things I can write about to give you some idea to know how I’m going here in Canada.

As you would probably guess from the title this time it would be about my two last weeks in Vancouver which were just great thanks to beautiful weather I was lucky to have over there and also nice memories I collected. I have been a few times again at North Vancouver in those amazing places I used to watch daily from my work. With David who started working recently in the pub we went for half a day trip to Grouse Mountain by BCMC Trail because mine original plan was ruined but the fact that trail marked on Open Street maps is closed since they made that area part of water shed for Capliano Lake something like 50 years ago. That dam is one of the three used as fresh water supply whole Vancouver and surrounding areas.

Also thanks to fact that temperatures are not any close to the summer we could see bears way more active then I saw them before, this time they were fed and those two love apples but not carrots :-).

At that same day I went to Lighthouse Park which is pretty place by the water with some amazing Douglas Firs and some top rope climbing which must be great in such environment, hope I’ll get there one day to try those. We get there by car but there is a bus stop close to park entrance so it’s convenient to get there also when you don’t have a car and even you are not going there to climb there is a lot to see for more then a half day.

Then with David again we did a trek to Mt Saymoure, one of the popular mountains around the city since there is a parking lot not that far from the peak and you will gain also quite some high by this. However, we started at sea level in Deep Cove as this is good place where you can start from bus and Google said it’s about 11 kilometers from the stop to the peak but this number is not that close to reality since I do believe it’s over 15 kilometers one way. Anyway it’s nice full day trip and way better hiking experience. On our way up we went around Goldie Lake and as you could see on following picture it’s just awesome when you have great weather like we did. 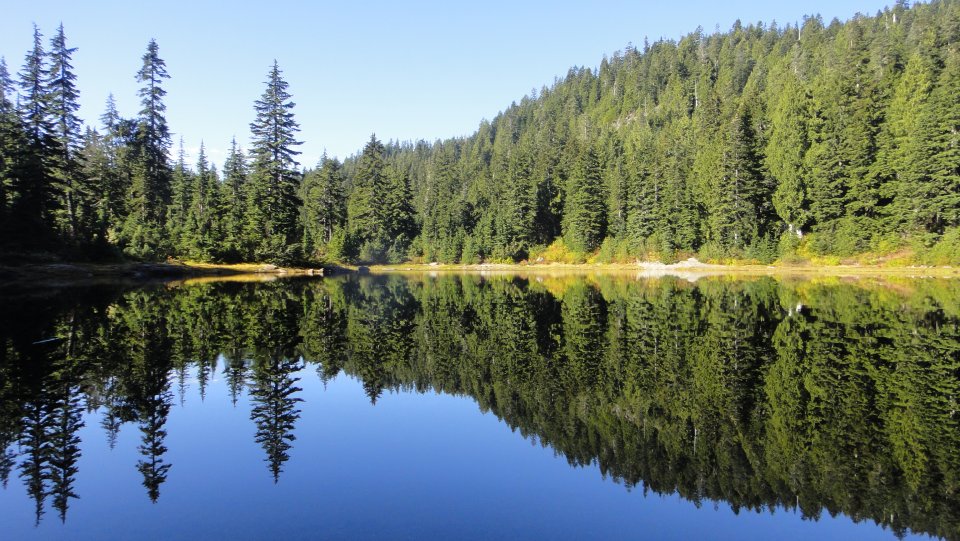 I reckon I couldn’t wish better weather for those last weeks in this amazing city. At the beginning of this nice trip I received a call they I was successful in application for a work at Halifax on the other side of Canada which make my day just perfect.

As you might know from beginning I was hunting for a job in my field (networking) to be able to stay in Canada longer because I know that a year here is not going to be enough especially while I work five or six days a week. So when I learned I got this offer from Halifax I sent message to my manager in the pub that I will work all planed shifts but that would be all (I talked with him before as I had feeling that this will go well) so I worked up to Sunday, November 28th then on Monday I flew over and started at new job on Tuesday morning.

During those nearly two weeks I have left in Vancouver I said goodbye to most of those amazing people I’d met during my short stay in the Vancouver.

My flight was with one stop in Toronto and everything was smooth I was just bit surprised by the snow cowering fields below us. The planes of Air Canada are probably better equipped then the one from Condor which I used to get to the Canada and the flight just passed by watching some movies. The whole flight with this stop was about seven hours and I again traveled in time so now I’m four hours closer to the Europe. At the Halifax airport I found that I’m not going to rent a car as I cannot do so with my debit card and while I tried Hertz as they accept international debit card also I had not luck either since it looks like they use Internet transaction limit for those and for once mine bank just had some maintenance on the Internet banking so I couldn’t increase it so I used a bus to get from the airport to the Halifax.

There I had booked accommodation in the Novel Stay something they called guest house or you could say cheap hotel where you get your own room without food close to the city centre for very reasonable price. In hotel materials is written that it’s European style hotel so probably it’s not that common to have something like this in North America. I had this hotel booked up to Sunday but at the end I moved our by Saturday as I found some other accommodation.

Here is one tip in case you would get to the East Coast, you would probably find way more offers for anything on kijiji while Craigslist which was mainly used in Vancouver and West Coast is pretty much dead. But be careful about accommodation scams I had encountered one myself while I was looking for some equipped unit or room where I failed on fact I wanted something for a few months before I get know the city to know where I want to live.

During this search I met a student from Saudi Arabia who told me he stayed for several months in home stay and he loved it and it remained me that David was also staying in Vancouver like that and he enjoyed it a lot so I tried it as well and succeed with this as I found a nice people and house where they are okay with month-to-month rent as those homestays are usually used by young people to live with local family and they have food provided and also they have to use the language to communicate with the world. For me the main thing I have nice and clean room and house to stay with food included for $650 which is way less that I had to pay in hotel and it’s way better then any dormitory or other places I saw in the week.

I have now simple plan to get know city and my new job better and then later on in January once I would know how it’s going to be with my visa to plan the next moves.

At the end I just add that I had to change my operator because Wind I used in Vancouver does not have coverage in this area so I switched to koodo, they use Telus network so you could count on good coverage Canada wide and also I did not found any other operator with similar tariff which would make me the same offer cheaper. I have 200 Canada wide minutes (as one of few they do not make difference between local and long distance calls), unlimited evenings and SMS and 200 MB of mobile data for $40 and because I’m using my own phone it’s $36.

Below it’s album with a few pictures from those trips.